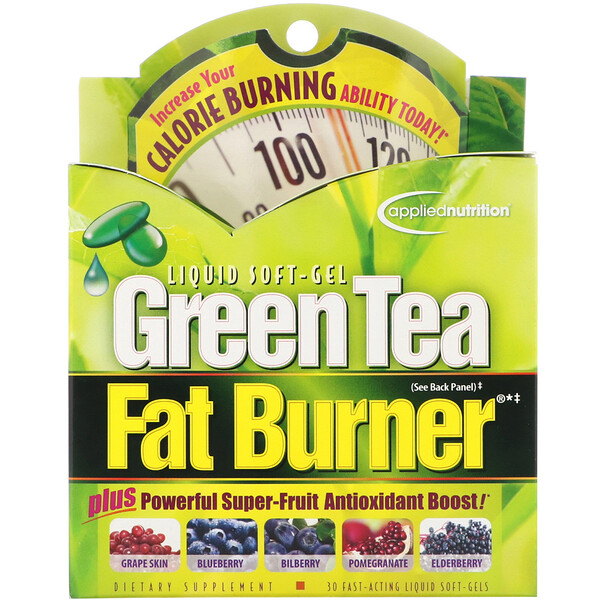 ‡Green Tea Fat Burner increases your calorie burning ability in fast-acting Liquid Soft-Gels. This product has been formulated to deliver a highly concentrated form of Green Tea Extract combined with caffeine that, while not literally "melting" fat off the body, has been shown to:

When used in conjunction with a reduced calorie diet and exercise, this product can help you achieve your weight loss goals.

EGCG - EGCG is the most powerful and most abundant flavonoid found in Green Tea. A body of research suggests that EGCG is responsible for the majority of health benefits that are attributed to Green Tea consumption. When combined with caffeine, EGCG has been scientifically researched for its weight management support. This product contains a full 400 mg of EGCG per maximum daily serving.

Vitality Boost - This blend of botanicals that contribute beneficial phytonutrients.

Do not use if safety seal is broken. This product contains ingredients that may affect blood pressure, heart conditions and/or blood sugar. Check with your doctor before using this product if you are using medication or have any medical conditions, including heart disease, high blood pressure, an iron deficiency, a liver disorder or develop symptoms of liver trouble (such as abdominal pain, dark urine or jaundice). It is recommended to limit additional caffeine intake while taking this product. Do not exceed 90 days of continuous use of this product without a two (2) week break. Do not use if you may become pregnant, are pregnant or nursing. Do not exceed recommended daily intake. Not intended for use by person under 18. Keep out of reach of children. Store in a cool, dry place.